This year’s presidential election was, by all accounts, a historic one. It came at the tail-end of a year defined by a global pandemic, a growing economic crisis and undeniable civil unrest. And even more unpredictable was the massive voter turnout that decided to exercise their right to vote despite all of these limitations. More so, part of the reason why the ballot-counting process took longer than usual was the large presence of mail-in ballots, which shows that people were eager to vote, by whatever means necessary. The numbers show this excitement: according to the United States Elections Project,​ around 66% of the voting-eligible population​ (VEP) participated in this election. This is the first time that number surpassed 60% ​since 1968​.
During the coverage of this election, black and latino voters both gained quite a bit of attention as voting data started to turn in. A lot of coverage highlighted that Donald Trump increased his popularity within the black vote, as he reportedly gained ​4 percentage points​ since the ​2016 election​. The Republican party had a similar gain among Latino voters, seeing a 3% increase between elections.

Plenty of left-leaning publications and news outlets chose to focus on this data and subtly shame these communities for increasing their support for President Trump. However, this approach might be slightly misguided, as it was largely influenced by the initial reports from counties where Democratic turnout had been lower than expected. 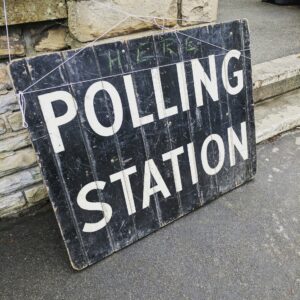 Instead, a much more fitting way of analyzing the data of POC voters would be to look at the role that black and latino people played in swing states. The 2020 election saw ​five swing states turning blue​, most of which ended up having relatively small margins of victory, causing for their vote-counting process to be significantly extended. However, a closer inspection at the exit poll data from two of these states, Arizona and Georgia, shows a strong trend: their movement towards a Democratic victory was largely led by black and latino voters, despite President Trump’s nation-wide gains on both communities.

The case of Georgia has gained a particular amount of attention. It was one of the last states to be called and ended up with a small margin of victory — ​about 0.3%​ (~14,000 votes.) However, given the large voter turnout of this election, the smallest percentages clearly matter, especially in states that don’t predictably stick to a Democratic or Republican vote. That small margin is also significant because, in the last election, ​President Trump won Georgia by 5.1%​ of the votes, a substantial Republican lean. Therefore, moving Georgia towards a Democratic vote was no easy task, especially given the special circumstances of this election.

Many have attributed Stacey Abrams, a former state legislator and nominee for Georgia’s gubernatorial race, for this shift. Abrams has spent the last decade creating different voter engagement strategies, especially aimed towards motivating disengaged black and latino voters. Earlier this year, her two organizations ​Fair Fight​ and the ​New Georgia Project​ both managed to register ​over 800,000 new voters.​ This engagement strategy helped expand and diversify Georgia’s coalition, as many of those new voters were young people of color. This
strategy caused a strong impact that helped Joe Biden win a state that became key to his victory.

The case in Arizona was not too different. Like in Georgia, Joe Biden ​won by a margin of 0.3% (~10,500 votes,)​ a much smaller difference than Trump’s 2016 win, with ​a 3.5% lead. ​That margin was slimmed down in this year’s elections largely because of local organizations that seek to engage young Latino voters. Six of these organizations have converged in the coalition Mi AZ​ and have driven voter registration in democratic local counties. The election showed the results of these efforts — Latino voters ​increased their engagement by 4 percentage points, making up 19% of the state’s votes. This was also complemented by a stronger Democratic lean with an increase of 2 percentage points.

Looking at these two cases shows just how much of an involvement black and latino communities had in this election. They have worked for years to create stronger Democratic coalitions, registering previously disengaged voters and reminding their communities of the importance of their votes. Under that context, a broad-strokes analysis of election data can often ignore these efforts and openly dismiss the strategic, carefully planned moves that these groups have taken. It is a movement that should not be dismissed when thinking about such a historic election.